I bought the Apple Watch series 6 and used it for a week!

This time, I would like to write down what I felt after using the series 6 and the SE for about a week. By the way, I usually wear SEIKO mechanical watch at work. I spent a week at work wearing the Apple Watchseries 6.

Current smartwatch which I am using

I’ve used a Garmin ForeAthlete ® 235 J running smartwatch before. I bought an Apple Watch this time, but I plan to continue using Garmin watches with the Apple Watch.

The Apple Watch I bought is a series 6 aluminum space grey GPS Nike model. I bought a 40 mm case. The reason I chose the Nike model is that there is a dial that can be used with the Nike model and an app called Nike run club is available. I wasn’t sure about the SE that was released along with Series 6 this time, but I decided to buy Series 6 because the SE doesn’t have a continuous lighting mode that always displays the dial on the screen.

The Nike model has the Nike logo engraved on the back of the case and part of the band.。

There is no problem with the feeling of using a sports band. It seems too casual for a business scene, so I think it will have a better impression if you match it with another band. However, it is easy to put on the arm and when it gets sticky with sweat, etc., if it gets dirty, you can quickly wipe it with a wet tissue, etc., or if you wash it with water and water it with a towel, it dries faster than a cloth band, and it is convenient for daily use, so I feel it is more expensive than other bands.

The color of the display is better and brightly than I expected.

How I actually ran on the Apple Watch

I did a light jog with workout running app.

You can see more detailed results by synchronizing with iPhone.

This time, I just put it on my arm and ran. I didn’t feel any difference in weight from the Garmin watch I used before. It’s light. I didn’t want the Apple Watch series 6 to get sticky because I paid a lot for it. I was hoping that buying an Apple Watch would boost my running morale, but when I do that, I’m going to stick with the usual sweaty Garmin ForeAthlete ® 235 J.

Why I Was Negative about the Apple Watch

The most negative factor was that I couldn’t check the time without raising my arm. But with the always-on lighting feature introduced in Series 5, my appetite for the Apple Watch has increased dramatically.

The next negative factor is the Apple Watch’s design. I usually use a mechanical watch except when I use Garmin for running. The majority of mechanical watches have round dials, and from the beginning when I first wound my watch on my arm, the round dials became the standard. So when the Apple Watch came out, I didn’t feel like working with it in my arms, walking around the city, or trying to get it into my life. The always-on lighting feature, which lets you look around to see what time it is, has helped alleviate negative feelings about the Apple Watch, but the design of the watch’s rectangular dial is still frustrating. I think the rectangular shape has the advantage of allowing more information to be displayed on the screen, but I’m hopeful that we’ll see a rounded Apple Watch case someday.

In addition to the design, the fact that the battery life is shorter than that of the Garmin ForeAthlete ® 235 J was one of the reasons why I was hesitant to buy the Apple Watch, but I was able to compromise on this point because the Series 6 supports rapid charging and I felt that the battery would last more than one day but less than two days for everyday use.

The constant light function changed me from a negative to a positive.

As I mentioned above, the ability to turn on the always-on light for negative feelings about the Apple Watch has made me from a negative to a positive. Even if I say affirmative, I have the impression that the needle that has completely touched the edge of negation has somehow passed the halfway point where negation switches to affirmation. The only thing that matters is whether it’s your favorite gadget or not, depending on how you use it.

One of the new features in the Apple Watch Series 5 and 6 is the ability to measure blood oxygen levels. Simply put, it is a function that measures the oxygen concentration in the blood when you put your arm on a flat place and stay still for 15 seconds after starting the application.

For 15 seconds, you can rest your arm on a flat surface, like a desk or knee, and the app will take your measurements. However, when asked if they’d like to incorporate this feature into their daily lives, it’s a subtle point that they have to sit still for 15 seconds to do the measurement, so you might want to enable background measurement in the blood oxygen monitoring application, and then use it to automatically measure and check the results whenever you want.

It is convenient to be able to control the music and programs that are playing by music application and podcast application of iPhone (My Recommendation!).

This is the most useful function so far.

I use iPhone 8plus in daily life. The iPhone 8plus is big enough that if I don’t want to pull it out of your pocket, I can skip songs, adjust the volume, and select a show for a podcast on the Apple Watch series 6 screen on my wrist without holding your phone. If you subscribe to YouTube Premium, you can play YouTube in the background on your iPhone and use your wrist to adjust the volume, skip to the next show, or go back to the previous one.

I feel that it is very convenient to be able to operate music application and YouTube to some extent without directly holding the iPhone.

The battery lasts longer than I thought.

To be honest, I didn’t expect battery life.

I thought it would be less than 30% after I went to work and came home. However, contrary to my expectations, when I left home at 6:30 AM and came home at 8 PM, there was about half of the battery left, so I felt that if I didn’t put a heavy load on the daytime running application, I could use it with plenty of leeway for daily use.

It is fun to customize the design of the clock face freely.

I didn’t think there were so many dials. My favorite dial is “Gradient” which is simple and playful.

In addition to the “Gradient” watch face, the available face is highly customizable, allowing you to change the color scheme of the face to your favorite color and to change the functions that can be placed on the face, called complications. In the screenshot above, temperature, calendar, podcast, and timer are set clockwise from the top left.

The Apple Watch also lets you take screenshots, and it’s great to be able to paste in the screenshots you’ve taken when writing these posts.

When I read about the Apple Watch on YouTube and in my blog post, I was told that the reason I was happy to buy it was that I could get notifications for emails that arrived on my phone. But I’ve been using it for a week, setting the notifications to only receive notifications for calls and not email notifications at all on the Apple Watch. That said, the ability to quickly and quickly check incoming emails on your wrist is useful. I don’t see any need for a cellular model for my purposes.

On the design side, I don’t want my colleagues to know I’m wearing an Apple Watch.

The Apple Watch is useful, but in terms of a watch, I thought it was not a must-have. If you think a watch is for checking the time, you can buy a 100 yen watch. Therefore, I think I would not have bought it if there was no function to light it all the time. In my case, I want the watch to be a device that can check the time just by looking at it without raising my arm, so the price is higher than SE, but I am satisfied with the Series 6. One thing that bothers me is that because it’s the cheapest aluminum model in the Series 6, it’s a little less rugged than other models like stainless steel or titanium. However, the aluminum model is not sapphire glass used in stainless steel and titanium models, but Ion-X tempered glass is used, so I don’t think it will break easily or slightly …

I wish I could write about the Apple Watch after a while if I wanted to write again.

I took a picture of the Apple Watch box, too, so I’d like to keep a record.

The Nike model looks cool in black packaging instead of Apple’s clean white packaging. I heard that the Hermes model comes in orange packaging, but as expected, it’s too expensive to buy …

Thank you very much for reading through. I hope my article will be of some help. 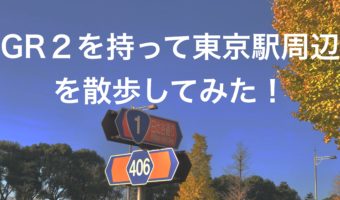 When I took a walk around Tokyo Station with GR2, I felt like I realized the reason why it is the best snap shooter! Hello everyone. There are only a few left this year. The rages of coronaviruses are scary, but how are you doing? This time, I had a chance to go to Tokyo […] 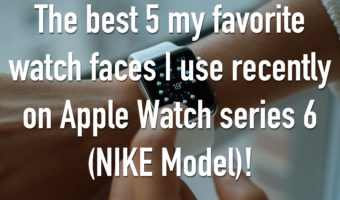 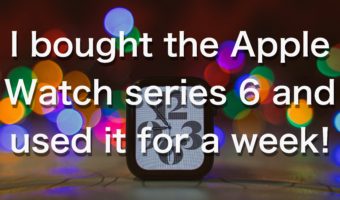 I bought the Apple Watch series 6 and used it for a week! Hello everyone. This time, I would like to write down what I felt after using the series 6 and the SE for about a week. By the way, I usually wear SEIKO mechanical watch at work. I spent a week at work […]